Richard Pite joins Alyn Shipton to pick the best discs by the founder of modern jazz drumming, Max Roach. They include pieces by many of Roach's own groups.

Alyn Shipton is joined by Tim Richards to explore the recordings of pianist Wynton Kelly.

Alyn Shipton explores the recorded catalogue of Wynton Kelly, one of the most individual pianists in jazz, famous for his work with Miles Davis, Dizzy Gillespie and Wes Montgomery.

Wynton Kelly was one of the most individual pianists in jazz, famous for his work with Miles Davis, Dizzy Gillespie and Wes Montgomery. He also led his own trio - often with fellow Miles Davis sidemen Paul Chambers (bass) and Jimmy Cobb (drums) who played with him on "Kind of Blue". Tim Richards guides Alyn Shipton through Kelly's impressive catalogue of recordings.

In an archive interview recorded during one of his last visits to the UK before his death in 2005, Ellington bassist Jimmy Woode talks to Alyn Shipton about his recorded catalogue.

Jimmy Woode was one of a dynasty of jazz musicians from Boston, where he began his career with the likes of Charlie Parker and Sidney Bechet. He joined Alyn Shipton during one of his last visits to the UK before his death, to select his finest records, including examples of his work with Ellington, and with the Kenny Clarke/Francy Boland band with whom he played after settling in Europe at the end of the 1960s.

Alyn Shipton is joined by Guy Barker to select the finest records by Thad Jones.

Trumpeter, composer, arranger and bandleader Thad Jones was a hugely influential musician. In this programme Guy Barker and Alyn Shipton discuss his finest work, including many discs under his own name, records with Count Basie and Charles Mingus, and records made by the big band he co-led with Mel Lewis.

American singer Mark Murphy is one of the most versatile vocalists in jazz. A master of scat and vocalese, he is also a renowned interpreter of ballads and standards. British singer Ian Shaw joins Alyn Shipton to consider Murphy's finest records, from his early work such as 'That's How I Love The Blues' to his vocalese masterpiece 'Stolen Moments'.

Martial Solal is one of France's most highly acclaimed jazz musicians. Prior to his solo appearance at this year's London Jazz Festival (in association with Radio 3) he talks to Alyn Shipton about his long recording career and also the Martial Solal International Piano Competition that takes place this month in Paris. His selection of albums ranges from solo piano to his current large ensemble the Newdecaband. He also talks about his long associations with American jazz musicians Lee Konitz and Paul Motian.

In an archive recording, Alyn Shipton talks to the late saxophonist Fred Anderson about his best CDs, including work with Joe Jarman, Muhal Richard Abrams and drummer Hamid Drake.

Fred Anderson, who died in June, was a founder member of the AACM in Chicago and ran the city's famous club, the Velvet Lounge. Alyn Shipton visited him at the site of his historic club before it was demolished in 2006, and talked to Anderson about his best recordings.

Alyn Shipton and Chris Batchelor review the music of the late trumpeter Harry Beckett, including work from his own bands as well as with Ian Carr, Mike Westbrook and Graham Collier.

Barbados-born Harry Beckett was one of the most fiery and inventive trumpeters in British jazz, right up until his death in July this year. Chris Batchelor joins Alyn Shipton to look back at Beckett's recordings, and to pick his best performances. As well as a range of music from his own bands, the programme includes Beckett's work with Ian Carr, Mike Westbrook and Graham Collier.

Author Tom Perchard joins Alyn Shipton to pick the recorded highlights of trumpeter Clifford Brown, who died in 1956. Including tracks from the Clifford Brown/Max Roach Quintet.

Clifford Brown died in a car crash at 25, robbing the jazz world of one of its most talented and original trumpeters. To mark the 80th anniversary of Brown's birth, author Tom Perchard joins Alyn Shipton to pick the highlights of his recordings. The programme centres on the Clifford Brown / Max Roach Quintet, but also includes a wide variety of other material including discs with Sarah Vaughan and with a string orchestra.

From his meteoric rise to fame with Benny Goodman to his small group records with Billie Holiday, pianist Teddy Wilson was one of the stars of the swing era. Pianist Martin Litton joins Alyn Shipton to select the best examples of Wilson's work, including his own short-lived big band, his solo recordings, and many latterday trios.

Singer Norma Winstone joins Alyn Shipton to select her best recordings, looking back to her early days with Michael Garrick, her long associations with John Taylor and Kenny Wheeler, and at songs for which she has written lyrics herself, including her renowned collaboration with Jimmy Rowles on The Peacocks.

Vibraphonist Gary Burton joins Alyn Shipton in front of an audience on the South Bank to pick his best recordings, including work with Carla Bley, Chick Corea and Pat Metheny.

Vibraphonist Gary Burton was a teenage prodigy and his four mallet style revolutionised his instrument's playing technique. Prior to his 2010 London Jazz Festival concert, he joined Alyn Shipton in front of an audience on the South Bank to pick his favourite recordings including work with Carla Bley, Chick Corea and Pat Metheny.

In front of an audience at London's Purcell Room at the 2010 London Jazz Festival, celebrated pianist Geri Allen joins Alyn Shipton to pick the highlights from her recorded work.

A product of the M-Base revolution and then a major artist on the Blue Note label, Geri Allen is one of the most accomplished female pianists in jazz. In this programme, recorded in front of an audience at London's Purcell Room, she joins Alyn Shipton to pick the highlights from her recorded work.

During his visit to the UK for the 2010 London Jazz Festival, South African drummer Louis Moholo Moholo joins Alyn Shipton to discuss the high points in a long recording career.

Louis Moholo Moholo arrived in London from South Africa in the 1960s with Chris McGregor's Blue Notes. During his visit to the UK for the 2010 London Jazz Festival, he joins Alyn Shipton to discuss the high points in a long and extensive recording career, that not only encompasses work with fellow South Africans Harry Miller and Dudu Pukwana, but also with mercurial American pianist Cecil Taylor.

Ian Smith joins Alyn Shipton to select the best recordings by trumpeter and vocalist Chet Baker, including his early West Coast quartets and his final records made in Europe.

Ian Smith joins Alyn Shipton to select the best recordings by trumpeter and vocalist Chet Baker, including his early work with Gerry Mulligan, his West Coast quartets and the early collaborations with Art Pepper. There is also a focus on his latterday career, and in particular the records he made in Europe in his final years.

Alyn Shipton is joined by Alan Barnes to choose the best recordings by saxophonist Sonny Stitt, one of the finest bebop tenorists and an individualist alto player.

Sonny Stitt was one of the finest bebop saxophonists, transferring the style of Charlie Parker to the tenor instrument, as well as developing his own approach to the alto. Fellow saxophonist Alan Barnes joins Alyn Shipton to choose the best examples of Stitt's work, including his recordings with Dizzy Gillespie, Bud Powell and Sonny Rollins as well as the many sessions he led himself.

Killed in a car accident aged just 25, Scott LaFaro was widely regarded as the most technically gifted bassist of the 20th Century. His records with Bill Evans are among the finest jazz trio discs ever made. Bassist Dave Green joins Alyn Shipton to pick the highlights of these, and to trace the other significant records in LaFaro's brief but brilliant career.

Alyn Shipton is joined by broadcaster and author Dave Gelly to select the best recordings by tenor saxophonist Hank Mobley, including his Blue Note work and some with Miles Davis.

Hank Mobley was one of the finest tenor saxophonists in jazz during the 1950s and 1960s. In this programme, fellow saxophonist, author and broadcaster Dave Gelly joins Alyn Shipton to select Mobley's best work. As well as the sessions Mobley led himself, principally for the Blue Note label, the programme looks at his brief period as a member of the Miles Davis quintet. 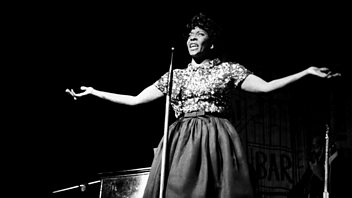 Dinah Washington was only 39 when she died of an accidental overdose of barbiturates in 1963. Yet in her short life she was one of the most successful of all jazz singers, also crossing into blues and pop territory. Gwyneth Herbert joins Alyn Shipton to pick the essential recordings by Dinah, starting with her bluesy repertoire of the mid-1940s and tracing her career as she became one of the finest interpreters of American popular song. The programme includes her collaborations with Quincy Jones and with the fourth of her eight husbands, Eddie Chamblee.

Roy Eldridge, with his fiery tone, brilliant upper register and inventive phrasing, was the most musically combative trumpeter of the swing era. The heir to Louis Armstrong and the main influence on Dizzy Gillespie, his own canon of work stands alongside theirs. New Orleans-born trumpeter Abram Wilson helps Alyn Shipton to select the key recordings by Eldridge, including his creative partnerships with Gene Krupa, Chu Berry, Artie Shaw, Lester Young and Art Tatum.