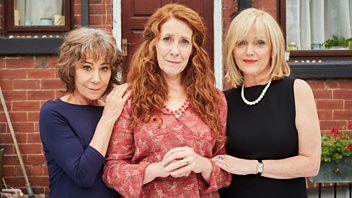 Kay Mellor on the real life inspiration for her new ITV drama Girlfriends, marking 200 years of Frankenstein and going on set with Rob Brydon in Swimming With Men.

Kay Mellor discusses her new ITV drama, Girlfriends, about three women in their late 50s, early 60s, and reveals how closely she's drawn on her own life and friends to write it.

Mary Shelley's Frankenstein was published on New Year's Day 1818. Christopher Frayling, author of Frankenstein The First Two Hundred Years, joins Janet Todd, the biographer of Mary Shelley's mother Mary Wollstonecraft, to discuss how we read Frankenstein in our era of genetic engineering and artificial intelligence and how we view Mary Shelley herself.

Upcoming film Swimming With Men, starring Rob Brydon and Daniel Mays, tells the true story of a group of middle-aged men who make it to the World Synchronised Swimming championships. It was shot earlier this year in Basildon swimming pool masquerading as Milan, Stig visited the set to meet Rob Brydon and the synchronised swimming trainer, Adele Carlsen.