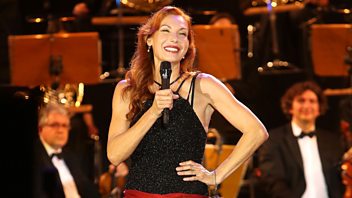 The German cabaret singer Ute Lemper joins Kirsty in the studio to perform from her Last Tango in Berlin series of songs, which features the music of Brecht, Weill, Piaf and Marlene Dietrich.

Kirsty visits Port Talbot where the National Theatre of Wales is staging a new play, We're Still Here, inspired by the threatened closure of the town's steelworks in 2015 and the hundreds of people who lost their jobs. Kirsty talks to the creators Rhiannon White and Evie Manning, and Sam Coombes, the steelworker who has taken a sabbatical to star in the production.

If you've ever wondered what it take to be a great conductor, Vasily Petrenko, winner of the Gramophone Artist of the Year 2017, gives his top tips of dos and don'ts. 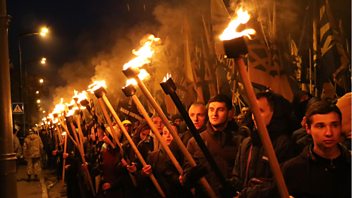 Anne Applebaum talks to Anne McElvoy about Russian nationalism and Ukrainian history in a programme exploring the importance of borders and the way identities are bound up with a sense of place. Nick Tandavanitj and Rhiannon White discuss creating drama out of the specific histories of Hull and Port Talbot. St John Simpson, curator of a British Museum exhibition devoted to a nomadic culture of antiquity, explains the ethos of the Scythians.

Anne Applebaum is a Professor at LSE and a columnist for The Washington Post. Her new book is called Red Famine: Stalin's War on Ukraine and covers the period from 1917 to the present.

Rhiannon White is co-artistic director of Common Wealth which is staging We're Still Here in Port Talbot at the Byass Works, Dock Road between 15 - 30 September in conjunction with National Theatre Wales. It's 6 years since they staged The Passion there.

Nick Tandavanitj has worked with Blast Theory since 1994. 2097:We Made Ourselves Over comprises five short science fiction films - each accompanied by an interactive film for smartphones - and live events across both Hull and Aarhus.

Scythians: warriors of ancient Siberia runs at the British Museum from 14 September 2017 - 14 January 2018.