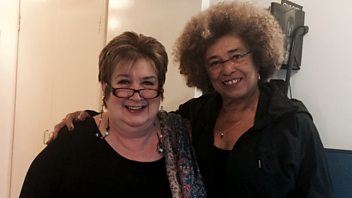 Prof Angela Davis, best known as a member of the Black Panthers in the 1960s.

Activist and member of the Black Panthers Prof Angela Davis talks about the journey from being on the FBI's 10 most wanted list to being in the 100 'cool' Americans exhibition.

Professor Angela Davis was known as a radical activist and member of the Black Panthers in the 1960s-1970s. 40 years on she talks to Jenni Murray about the journey from a place on the FBI's ten most wanted list to a place in the 100 'cool' Americans exhibition earlier this year in Washington's National Portrait Gallery.

Former Vogue editor and founder of the charity OAfrica Lisa Lovatt-Smith talks about her new book Who Knows Tomorrow and her work in Ghana which has been inspired by her own upbringing.

Mosac are an organisation which tries to offer support to the non-abusing parents of children who've been sexually abused. Following Jane's interview with Luci Coffey, an advocacy manager from Mosac, we hear from a woman the programme calls Jackie who has two daughters, both of whom were abused by their father. Her testimony is spoken by an actor.

And the Scottish-Zambian singer songwriter Namvula performs live and talks to Jane about her new album, Shiwezwa, and the women who inspired it. 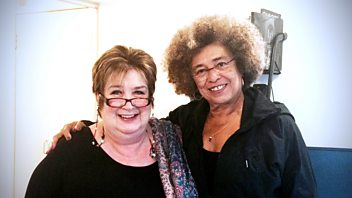 Professor Angela Davis, the enduring appeal of Laura Ingalls Wilder, and is there a place for men in the feminist movement?

The celebrated civil rights activist Professor Angela Davis on what it's like to go from being on the FBI's ten most wanted list to a place in the 100 'cool' American's exhibition in Washington earlier this year.

We discuss the link between hormones and mental health and what it's really like to be a teen with PMT.

The TV series Little House on the Prairie was based on the books of Laura Ingalls Wilder. We look at the continuing enduring appeal of her original books and the latest annotated autobiography Pioneer Girl.

We hear about the campaign to stop parents who have abused their children from continuing to disrupt their lives and from a woman whose daughters were abused by their father and despite being convicted of the offence still fought for access to them.

Plus you may not know the name Bevis Shergold but she made a huge contribution to the war effort interrogating POW's in Egypt and Algeria as well as representing Britain in the 1948 London Olympics.

A debate on whether there is a place for men in the feminist movement? And can the struggle for equality for women around the world also improve the lives of men as well?