Series 3 Episode 5: To Play the King 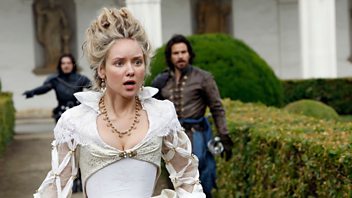 Drama. The Louvre comes under threat when Grimaud and Feron stage an ambitious Chatelet breakout. Are the musketeers looking for danger in the wrong places?

The musketeers battle to restore order in Paris after Grimaud and Feron stage an ambitious Chatelet breakout, setting free a lunatic with murderous designs on the Louvre. Using one prisoner's unlikely talents to rob the royal vault, the plotters prepare to make their first move against the king. But ailing Feron is distracted, and his ruthless silencing of an unwelcome visitor could be Grimaud's undoing. Ambitions collide during the Dauphin's birthday party, where a kind act by d'Artagnan pushes lovers together and ends in catastrophe.

Series 3 Episode 6: Death of a Hero 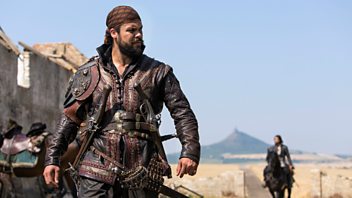 It's the day of reckoning, as Grimaud vows to kill the Musketeers.

It's the day of reckoning as Grimaud vows to kill the Musketeers and puts disgraced Feron to the ultimate test in his bid for power.

It's the day of reckoning, as Grimaud vows to kill the Musketeers in a series of savage co-ordinated attacks and puts Feron to the ultimate test in his bid for power. With Athos distracted and Aramis on an unlikely pilgrimage with the King, the Musketeers are divided when they need each other most. The furious battle for survival sparks a series of revelations that threaten to destroy Paris. Before the day is out, a hero falls, there's a traitor on the rise and the Musketeers will be changed forever. 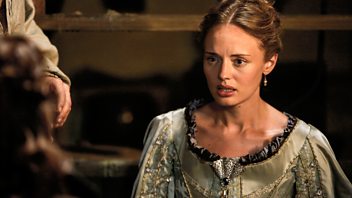 The musketeers must place their faith in an old enemy to save the future of the monarchy.

Historial drama. The future of the English monarchy rests on the musketeers' shoulders after Louis orders them to recover the Queen of England's missing jewels.

The future of the English monarchy rests on the musketeers' shoulders after Louis orders them to recover the Queen of England's missing crown jewels. It's a daunting mission, made more complicated when they unmask the thief. Fighting every instinct, the Musketeers must place their faith in an old adversary to hunt down the diamonds. The ensuing mayhem tests each of their loyalties to the limit, and a surprise reunion results in heartbreak for Aramis. Meanwhile, Feron seizes an opportunity to avoid personal scandal. 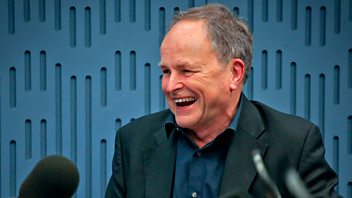 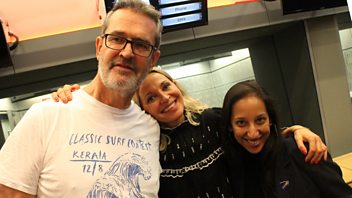 Nikki Bedi and guests with an eclectic mix of conversation, music and comedy.

Nikki Bedi is joined by actor Rupert Everett, OMD's Andy McCluskey and broadcaster Bidisha for conversation and comedy. With music from OMD and Thabo.

Nikki Bedi is joined by actor Rupert Everett, OMD's Andy McCluskey and broadcaster and journalist Bidisha for an eclectic mix of conversation, music and comedy. With music from OMD and Thabo. 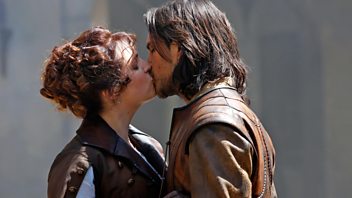 The musketeers battle corruption in a race to save Paris's refugees from the noose.

Drama. As Paris starves, Grimaud and Feron hatch a plan to frame the city's refugees for theft. Can the musketeers break the conspirators' grip on Paris in time?

With Paris on the brink of starvation, Grimaud and Feron join forces with the Duke of Beaufort to win the king's business by framing the city's refugees for grain theft. D'Artagnan's hot temper makes him a Red Guard target and lands him in the chatelet with the victims, whose execution date looms. One man down, the musketeers race to discover the truth. Spirited refugee Sylvie catches Athos's attention and he vows to prove her friends' innocence - but is he wise to trust her? With a spy in their midst, can the musketeers break the conspirators' grip on Paris before the refugees hang? 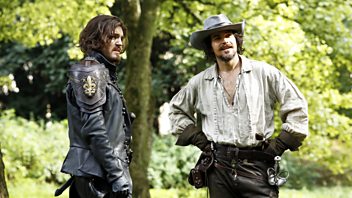 When the king invites his brother Gaston out of exile, the musketeers must make a choice.

Historical drama. When the king invites his brother Gaston out of exile, a tragedy forces the musketeers to choose between their royal duty and fellow soldiers.

Under orders, the musketeers defend Louis's traitorous brother Gaston after he slaughters a band of veteran soldiers in a Paris tavern. The heartbroken owner, Christophe, demands justice - but the preoccupied king welcomes his formerly exiled brother home with open arms. As tensions ignite and secrets spill, Treville crosses a dangerous line, and the musketeers are forced to choose between their royal duty and fellow soldiers. Meanwhile, Feron and Grimaud spy a kindred spirit in Gaston.

Rupert Everett, Abir Mukherjee, Sex and the City 20 years on 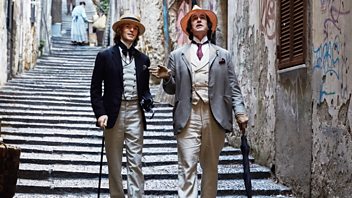 Rupert Everett on writing, directing and playing Oscar Wilde in The Happy Prince.

Rupert Everett disusses playing Oscar Wilde in The Happy Prince; novelist Abir Mukherjee on his latest, Smoke and Ashes; Sex and the City, 20 years on; and the late Mary Wilson.

Rupert Everett discusses his life-long passion for Oscar Wilde as he directs, writes and stars in his film The Happy Prince. Framed around Wilde's short story of the same name, the bio-pic focuses on Wilde at the end of his life, from his release from prison to his death in poverty in Paris three years later.

Abir Mukherjee's creation of detective Sam Wyndham, a British officer who finds himself in Calcutta in the 1920s, and his sidekick 'Surrender-Not' Bannerjee, won him a £10,000 publishing deal. He discusses the third book in the series, Smoke and Ashes, set against the backdrop of non-violent protest and increasing demands for Indian independence.

Twenty years ago this week Sex and the City launched in America on the HBO channel. To mark the anniversary, TV critic Emma Bullimore pours herself a Cosmopolitan and looks back at her favourite show...

Mary Wilson, who died yesterday at the age of 102, was in the public eye as the wife of the former Prime Minister Harold Wilson. She was lampooned in Mrs Wilson's Diary in Private Eye as a suburban down-to-earth middle class housewife. She was, though, something much rarer - a very popular poet. From the archive we hear her talking about her writing, the public response, and one of her poems. 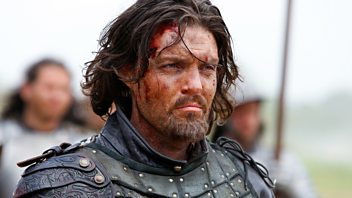 The battle-scarred musketeers reunite to rescue orphans from a brutal mercenary.

Historical drama. In France the musketeers reunite to rescue some orphans from a brutal mercenary. After years at the monastery, is Aramis still a musketeer at heart?

In war-torn France, three musketeers launch a daring attack on the Spanish while Aramis battles his conscience at the nearby monastery. When brutal mercenary Lucien Grimaud brings the war to Aramis's new home, the former friends reunite to foil a stolen arms deal and rescue a group of orphans. Four years after vowing to never fight again, is Aramis still a musketeer at heart? Meanwhile, in Paris, a sinister new battle awaits in the form of the corrupt governor Philippe Feron.