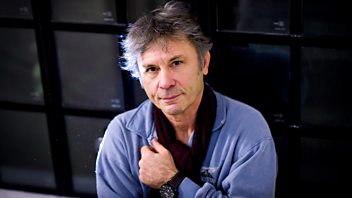 Bruce Dickinson of Iron Maiden joins Richard and Aasmah in the studio.

Extraordinary stories, unusual people and a sideways look at the world.

Bruce Dickinson is best known as lead singer one of the most successful heavy metal bands in history, Iron Maiden. But he's also a airline captain, international fencer, radio presenter, and writer, who has now written his autobiography. The man once billed a "Human air raid siren" joins Richard Coles and Aasmah Mir in the studio.

Alby Shale's father, Christopher Shale, died of a heart attack aged 56 in 2011 when Alby was 20. Not long before he died, he'd taken Alby to Rwanda to show him the volunteering work he'd been doing there, which had resulted in a plan to open the country's first national Cricket stadium. After his father's sudden death, Alby decided to help complete the project and joins us after having just returned from Rwanda where he watched the stadium's opening ceremony and inaugural match.

We also meet Shobna Gulati, actress, writer and dancer known for her roles in Dinnerladies and Coronation Street, about to star in Daisy Pulls it off.

And listener Clorinda Goodman is a solicitor turned stone mason. She will join us to talk about what she's got out of turning to this physically demanding and creative craft in later life.

and JP gets an insiders tour of Birmingham Royal Ballet's Nutcracker.

What does this Button do by Bruce Dickinson is out now 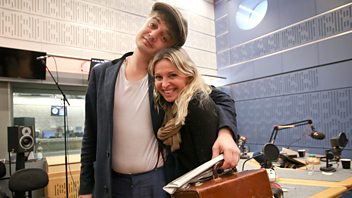 Clive Anderson and Nikki Bedi are joined by Peter Doherty, Victoria Coren Mitchell, Shobna Gulati and Fisher Stevens for an eclectic mix of conversation, music and comedy. With music from Peter Doherty and Jain. 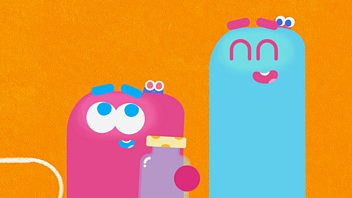 On a mini-beast hunt, Barry and Kari have to learn from experience to avoid a big puddle!

Barry and Kari are very excited to be going on a mini-beast hunt, but they have to learn from experience to avoid an enormous puddle!

Barry and Kari are very excited about going on a mini-beast hunt, but they have to learn from experience to avoid an enormous puddle! They are rewarded with a special sighting of - and tickles from - two special mini-beasts.

A group of young Treasure Champs take on a maze challenge, and another learns how to make pottery with the help of her grandad.

Plus, storyteller Krissi tells the Biblical story of The Wise and the Foolish Builders. 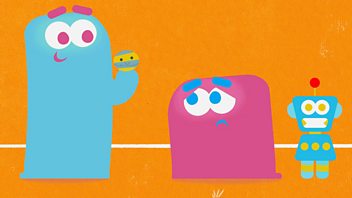 Barry has many toys but is only willing to give Kari a small pebble to play with.

Barry has many toys but is only willing to give Kari a small pebble to play with. Kari turns it into an exciting toy character and generously lets Barry play with it.

Barry is playing with his many toys but is only willing to give Kari a small pebble to play with. When Kari turns it into an exciting toy character, she shows true generosity by letting Barry play with it. To show his thanks, Barry gives Kari a Super Mega Awesome Stone, but it's so heavy it sends Barry crashing through the floor!

We meet a group of young Treasure Champs who show generosity with their time by visiting a retirement home for the elderly, and a brother and sister encourage generosity in others as they take part in a sponsored bike ride.

Plus, storyteller Omar tells a Sikh story called The Rich Man and the Needle.

Series 11 Episode 6: Demons of the Punjab 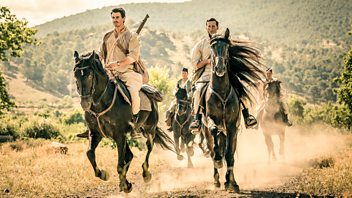 Doctor and her friends arrive in the Punjab, India, in 1947, as a country is split apart.

India 1947. The Doctor and her friends arrive in the Punjab. As demons haunt the land, can Yaz discover the hidden story of her grandmother's life?

India, 1947. The Doctor and her friends arrive in the Punjab, as India is being torn apart. While Yaz attempts to discover her grandmother's hidden history, the Doctor discovers demons haunting the land. Who are they, and what do they want?

Series 11 Episode 4: Arachnids in the UK 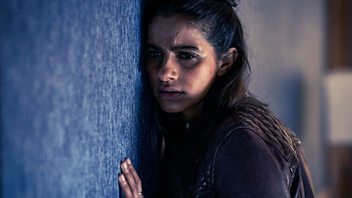 Something is very wrong with the spiders of Sheffield. The Doctor and friends investigate.

In Yorkshire, the Doctor and friends meet Yaz's family - and uncover a creepy mystery at the heart of the city. What is happening to the spiders of Sheffield?

'Something's happening with the spiders in this city.' The Doctor, Yaz, Graham and Ryan find their way back to Yorkshire - and Yaz's family - only to find something is stirring amidst the eight-legged arachnid population of Sheffield. 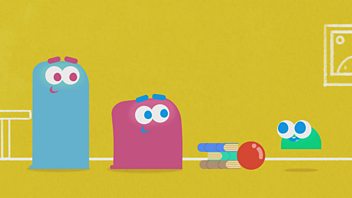 Barry, Kari and Thingy try to decide what to play. What is the fairest way to choose?

Barry, Kari and Thingy are trying to decide what to play. They decide they ought to play whatever most of them want to play, so they take a vote.

Barry, Kari and Thingy are trying to decide what to play. They try the tactic of 'loudest voice wins' but Thingy is the noisiest of all! Instead, they opt to play what most of them want to play. Barry and Kari win with their choice of reading, and Thingy is more than happy to join in.

We meet a class of young Treasure Champs who are taking part in a vote to decide an end-of-term treat, and another pair of siblings who have campaigned for their local library.

Plus, storyteller Amy tells the fable of The Farmer's Cart. 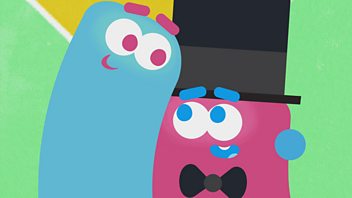 Kari is hosting a talent show, but Barry needs help to recognise his talent.

In order to celebrate their gifts, Kari is hosting a Treasure Champs talent show, but Barry needs help to see that his unique talent is worthy of a performance.

Preschool mixed media show exploring moral values common to different faiths and cultures. In order to celebrate their gifts, Kari is hosting a Treasure Champs talent show, but Barry needs help to see that his unique talent is worthy of a performance. Thingy's limbo stunt and Kari's trumpet playing and ball bouncing act go down a storm, but how will Barry's combination of yodelling and eyebrow dancing be received?

We meet one Treasure Champ who takes part in a special family photoshoot and another who is showing her violin skills to her whole class.

Plus, storyteller Ben tells the story of David the Singing Shepherd Boy. 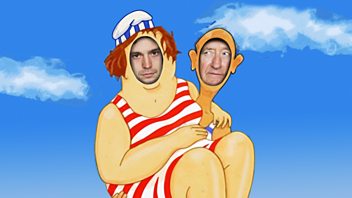 Jeff and Andy are on a quest - Jeff for spiritual solace, Andy for a proper roast dinner.

Uncle Jeff and Andy are both on a quest - Jeff for spiritual solace, Andy for a proper roast dinner. With spuds. From 2016.

Dawn breaks on a beautiful Sunday morning in Flamford. Uncle Jeff is on a quest for spiritual comfort and persuades his nephew Andy to join him by bribing him with the promise of a proper roast dinner.

They find that the local church has installed a new vicar, the Reverend Beverley, who invites Jeff to her bible class that evening. The words "bring a bible" strike a chill to Jeff's heart. He has never owned a bible, and neither has Andy.

They spend the rest of the day trying to find a bible on a Sunday, with Andy's stomach rumbling as he pictures his dinner slipping further away. On their quest they encounter Derek Horrox The Mayor, Peter Humfriss, The Town Crier, and a slightly unnerving bookseller.

An Absolutely production for BBC Radio 4 first broadcast in June 2016. 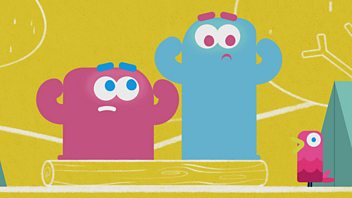 Home is far too noisy, so Barry and Kari go to the countryside for some peace and quiet.

Home has become far too noisy for Barry and Kari, so they decide to go to the countryside for some peace and quiet.

Home has become far too noisy for Barry and Kari, so they decide to go to the countryside for some peace and quiet. But the wildlife noises, map rustles and a squeaky camera tripod mean it's no more peaceful a place! It’s not until they stop and listen that it becomes restful and relaxing - until a swarm of flies come to visit!

A group of young Treasure Champs learn how to meditate at school with a visiting Buddhist monk, and another finds peace with his mum amidst a busy city in a local community garden.

Plus storyteller Ben tells us the fable of a man who wishes for a busy life - then craves the peace he once had - in The Three Wishes.

Series 1 The Girl from the South 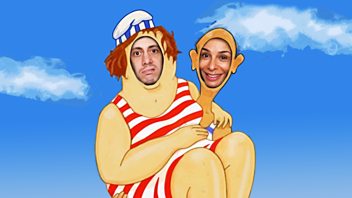 Uncle Jeff decides his nephew needs a girlfriend and Fish Shop Frank’s niece visits from down south. With Tom Palmer. From 2016.

Uncle Jeff, out of the blue, decides that his nephew Andy needs a girlfriend.

Andy decides that he does not. Jeff persists - Fish Shop Frank has his niece visiting from down south, and she is, by all accounts, "a lovely girl".

While waiting for Andy to agree, Jeff takes him to the local hypermarket ostensibly for supplies, but in fact because Jeff has read in a magazine that supermarkets are the ideal place for young singles to meet.

While Jeff is wrongly detained for shoplifting, Andy runs into an old flame from London, Liz. She's staying with her Uncle Frank - so this is the "lovely girl" Jeff's been banging on about! Can Andy rekindle the relationship with his old flame?

An Absolutely production for BBC Radio 4, first broadcast in July 2016. 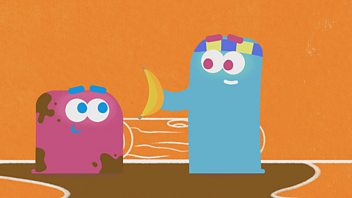 Kari has sacrificed time and energy training for an obstacle race, but Barry hasn’t.

Kari has sacrificed time and energy preparing for an obstacle race in the hope of winning a trophy for her collection. But Barry hasn’t trained and struggles in the race.

Kari has sacrificed time and energy preparing for an obstacle race in the hope of winning a trophy for her collection, but Barry hasn’t trained and struggles in the race. Kari sacrifices her chance of winning to go back and help her friend, and to say thanks Barry gives her one of his trophies, which Kari puts in pride of place with her other awards.

One young Treasure Champ has decided to sacrifice some of her hair for a wig-making charity, and another shows how devoting lots of time to training can result in being a fantastic gymnast.

Plus storyteller Gemma tells the Biblical story of The Widow’s Mite.