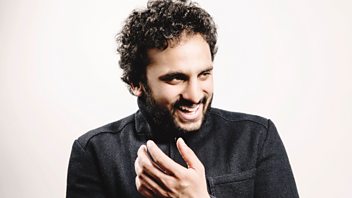 Comedians Nish Kumar and Katy Brand tell Harriett Gilbert about their favourite books. Portnoy's Complaint by Philip Roth is revisited, but does it still stand up?

Comedians Nish Kumar and Katy Brand tell Harriett Gilbert about their favourite books. Katy's choice is the hilarious Portnoy's Complaint by Philip Roth. But does it still stand up after all these years?

Nish introduces the two white people in the studio to Why I'm No Longer Speaking To White People About Race by Reni Eddo-Lodge.

And Harriett recommends a collection of poetry, A Scattering by Christopher Reid, that expresses the pain of grieving the loss of a loved one. 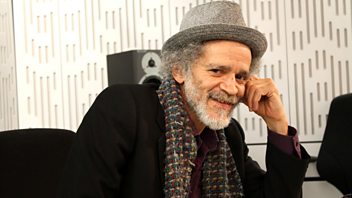 Alfie Boe is one of our most popular tenors. He is starring as Billy Bigelow in Rodgers and Hammerstein's Carousel alongside Katherine Jenkins at ENO's London Coliseum. He has performed in opera and musical theatre alike, from Baz Luhrmann's La Boheme on Broadway to leading the cast of Les Miserables in the West End. The youngest of nine children, he left school to work as a mechanic before being plucked off the shop-floor to stardom. Carousel is at ENO's London Coliseum.

John Agard is a poet. Winner of the Queen's Gold Medal for Poetry, his new show Roll Over Atlantic is a reimagining of the voyage of Christopher Columbus and his discovery of the 'New World'. Born and educated in Guyana, John came to the UK in 1977. His most famous poems explore identity and belonging and he writes for children as well as adults and is well known for his skill in performing poetry. Roll Over Atlantic is on tour.

Allan Jenkins is the editor of the Observer Food Monthly. In his memoir, Plot 29, he recounts his life growing up in foster care with his brother Christopher. Their foster father introduced them to the joys of growing flowers which triggered Allan's lifelong love of gardening. As the boys grew up, their lives took different paths and Allan began to search for the answers to questions about his past. His book follows the course of a year in which he traces the story of his birth parents and finds solace tending his London allotment. Plot 29 - A Memoir is published by Fourth Estate.

Katy Brand is an award-winning comedian, writer and actor. She is taking part in the Red Nose African Convoy acting as one of the outriders to a convoy of HGVs travelling from Kenya to Uganda to deliver supplies to Comic Relief funded projects. Katy's show I Was a Teenage Christian explores her youthful fascination with evangelical Christianity. The Red Nose African Convoy is broadcast on BBC One. I Was a Teenage Christian is on tour from May. 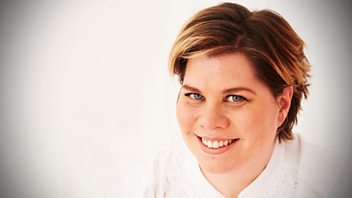 Richard Coles and Aasmah Mir are joined by writer and comedian Katy Brand.

Richard Coles and Aasmah Mir are joined by the writer and comedian Katy Brand, author Harry Bucknall who followed all 1,411 miles of the Via Francigena Pilgrims walk from the City of London through England, France, Switzerland and Italy to Rome, and actor Daniel Laurie who's become the first student with Downs Syndrome to be accepted to the Royal Central School of Speech and Drama Theatre School Summer Course. Author and former news correspondent Gerald Seymour recalls his meeting with Maurice Bailey who, in 1973, with his wife Maralyn survived for 117 days on a rubber raft in the Pacific Ocean, and Maurice tells his side of the story. Alice Morrison has recently run the toughest footrace on earth - the Marathon Des Sables: six marathons in six days across the desert in temperatures of 50 degrees, carrying all your own provisions. The conductor and violinist Sir Neville Marriner shares his Inheritance Tracks and JP Devlin will be in the studio reading your emails and waiting to take your calls.

Katy Brand will be at the Wilderness Festival in Oxfordshire on the Sunday 10th August and her book Brenda Monk Is Funny was published by crowd-funding publisher Unbound on 31st July 2014.

Harry Bucknall's book Like A Tramp, Like A Pilgrim: On Foot, Across Europe to Rome was published in July 2014 by Bloomsbury.

Duchess of Cornwall on Shakespeare; Women in comedy; Teaching consent; Living to Over 100 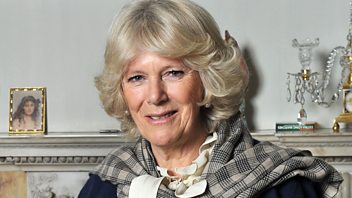 The Duchess of Cornwall talks about Shakespeare in schools. Jane Garvey presents.

The Duchess of Cornwall talks about Shakespeare in schools; women on comedy TV panel shows; teaching consent; and living to over 100. Jane Garvey presents the female perspective.

The Duchess of Cornwall gives her verdict on young performers at the Shakespeare Schools Festival, which offers students from all backgrounds the opportunity to perform on their local professional stage. We discuss the benefits of performing Shakespeare for children today.

The Director of BBC Television says there be at least one woman on every BBC TV Panel show. So are quotas on entertainment shows a good idea or should it be all about the quality of the talent?

Life expectancy for girls has officially broken the 100-year barrier for the first time according to Public Health England. So how should young women be preparing for their future and what might that future look like? 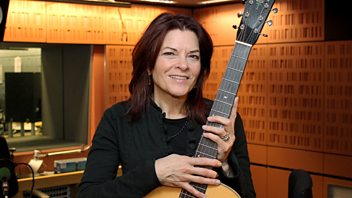 Rosanne Cash on her new album. Living to be 105. And the end of all-male TV panel shows.

Rosanne Cash on her latest album and her father's legacy. Could all-male TV panel shows be a thing of the past? And how a stray cat changed the life of an autistic boy.

Rosanne Cash on how her latest album, The River and the Thread, took her on a journey through her family history, and how she deals with her father Johnny's legacy.

Jenny Molloy a "care leaver in recovery" shares her story of how at just 9 years old, she walked into a police station in North London with her two younger brothers and asked to be taken into care.

Why girls born today are now expected to live to 105 - how will that impact on our working and family lives?

Plus could all male TV panel shows be a thing of the past ? the story of how a stray cat changed the lives of a mother and her autistic son and music from Katy B. 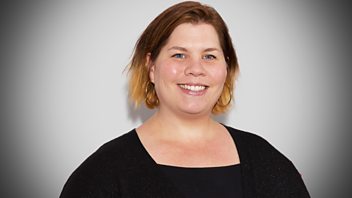 Comedian Katy Brand graced our screen in her Big Ass Show where we saw her parody pop culture. She danced like Beyonce for Sport Relief, has written her first novel Brenda Monk is Funny and her acting credits include Peep show and Nanny McPhee. Now she's a judge on the Costa book awards.

Almost four years ago Clare Owen found a gold wedding ring with an inscription and date. Her desire to reunite the ring with it's owner led her to set up her own lost and found company, Lostbox. She joins us to talk about how she's since reunited animals, soft toys and even people and to sing the praises of much maligned social media.

Levison Wood is an explorer who can currently be seen Walking the Himalayas in a Channel 4 documentary series. It's a distance of 1700 miles. He previously Walked the Nile. He joins Aasmah and Richard to share his experiences and explain why he is drawn to such expeditions.

Dr Eugenia Cheng is on a mission to make maths accessible. She does online maths tutorials, teaches maths to arts students and advises primary school teachers and she's even written a book about it in relation to baking: How to Bake Pi. She'll be talking about her passion for maths, music and infinity.

JP takes a look in the diary of listener Barbara Bindley and we have your thankyous.

Levison Wood's book Walking the Himalayas is out now, and the fourth and fifth parts of the series air on Channel 4, 8pm Sundays and the whole series can be viewed on All 4.

The Rest is History 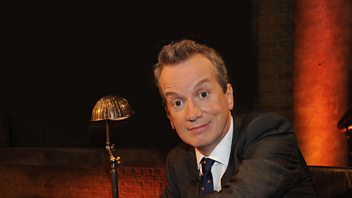 Frank Skinner loves history, but just doesn't know much of it.

This comedy discussion show with celebrity guests promises to help him find out more about it.

Frank and company navigate their way through the annals of time, picking out and chewing over the funniest, oddest, and most interesting moments in history.

An Avalon production for BBC Radio 4 first broadcast in December 2014.

The Rest is History

The Rest is History: Series 1 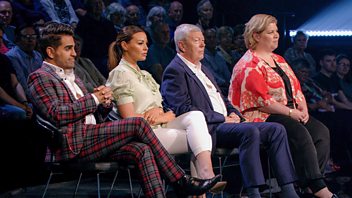 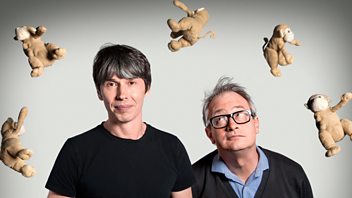 Prof. Brian Cox and comedian Robin Ince host a TV special of the witty and irreverent hit science/comedy panel show, looking at the big scientific discoveries of the past 10 years

Professor Brian Cox and comedian Robin Ince host a TV special to celebrate the 100th episode of the witty and irreverent hit science/comedy panel show, looking at the big scientific discoveries of the past 10 years.

Joining them are comedians Katy Brand, Brian Blessed, Eric Idle, Dave Gorman and Andy Hamilton (to name a few) to consider what has been learnt since the first episode back in November 2009. Science royalty Alice Roberts, Neil De Grasse Tyson, Sue Black, Fay Dowker, David Speigelhalter, Richard Wiseman, Tony Ryan and Andrea Sella name their own big scientific discoveries, from the Higgs Boson, to gravitational waves, to our understanding of how humans evolved.

Plus the panel are joined by Reverend Richard Coles and the former Dean of Guildford The Very Reverend Victor Stock, to give their view from Clergy Corner. More tea and infinite particles vicar?!