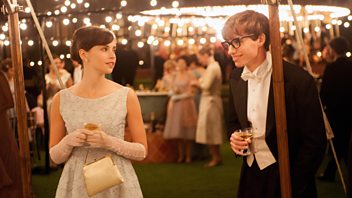 Eddie Redmayne and Felicity Jones on The Theory of Everything.

Eddie Redmayne and Felicity Jones on The Theory of Everything, soprano Renee Fleming on her new album, Billie Whitelaw remembered, and the dark side of Christmas films.

Eddie Redmayne and Felicity Jones talk to John Wilson about their new film The Theory of Everything about the physicist Stephen Hawking; soprano Renée Fleming on her new album Christmas in New York; Billie Whitelaw remembered by former theatre critic Benedict Nightingale; and Adam Smith considers the dark side of Christmas films. 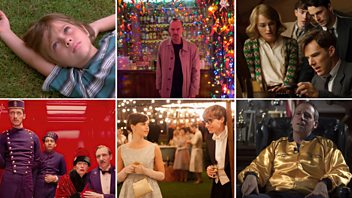 News of the nominations for the 2015 Oscars. Presented by John Wilson.

News of the nominations for the 2015 Oscars, including interviews with nominees and analysis of the runners and riders. Presented by John Wilson.

John Wilson reports on the nominations for this year's Oscars which were announced today.

Including interviews with British nominees Eddie Redmayne, Felicity Jones and Rosamund Pike as well as analysis from critic Larushka Ivan-Zadeh and predictions for which films and actors will triumph on the night.

The World's End; Mark Gatiss On the Buses; Breathe In; Hans Zimmer 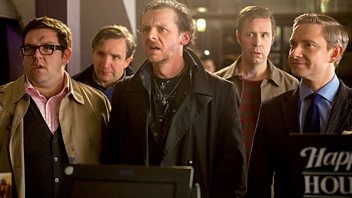 Matthew Sweet talks dangerous nostalgia with The World's End director Edgar Wright. Mark Gatiss looks back at cinema spin off of On the Buses. Plus Hans Zimmer on his big break.

Matthew Sweet talks dangerous nostalgia with Edgar Wright, director of the comedy The World's End. Starring Simon Pegg and Nick Frost, the plot follows the group of friends as they return to their home town to complete a pub crawl from their youth. Their mission is thrown off course by aliens. Edgar Wright reveals an autobiographical bent to the tale.

The Oscar-winning composer Hans Zimmer has written scores for countless films from The Lion King to Driving Miss Daisy to Gladiator. He describes the moment he got his big break, composing the music for Rain Man.

Felicity Jones and director Drake Doremus are back with a new film Breathe In, about an English exchange student whose arrival in upstate New York throws the perfect lives of her host family into chaos. The pair previously made Like Crazy together and explain their love of improvisation and risk-taking with performance.

Mark Gatiss is also dabbling in nostalgia. As part of his series on 70s sitcom cinema spin offs, he looks back at Holiday On The Buses, a distinctly uncomfortable watch.

And on the Film Programme website, White Elephant. Newly released on dvd, this film explores the lives of priests working in the slums of Buenos Aires. The director Pablo Trapero describes working in these areas as a teenager and how this inspired his latest film. Its release proved timely as the new Pope had also worked in the slums and granted the film crew permission to approach the priests there when making this feature.

Series 4 Episode 7: The Unicorn and the Wasp 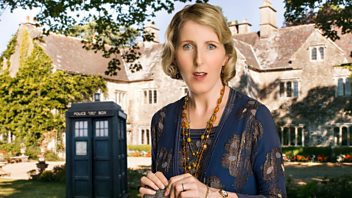 In 1926, Agatha Christie disappeared for ten days. Was a giant alien wasp to blame?