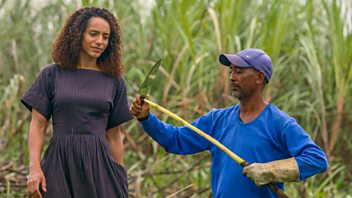 Samuel L Jackson examines how, for over 400 years, the trans-Atlantic slave trade became the greatest wealth-generating machine the world had known and the engine that drove the global economy.

Samuel L Jackson - with journalists Afua Hirsch and Simcha Jacobovici - examines how, for over 400 years, the trans-Atlantic slave trade became the greatest wealth-generating machine the world had known and the engine that drove the global economy. Afua goes to Brazil, once the world’s greatest supplier of sugar, to discover how Europeans' insatiable appetite for this sweetener drove the explosion of the slave trade in the 17th century, leading to a constant demand for the supply of cheap trans-Atlantic labour to work the plantations. She then visits Bristol, revealing how the enormous profits generated by these enslaved Africans built much of the modern world we live in today.

Jackson reveals how slave owners came up with increasingly inventive ways to turn their losses into profits when trafficked Africans were lost at sea. As the economics of the slave trade began to unravel, one infamous British court case ultimately helped paved the way for abolition. Jackson teams up with DWP, Diving with a Purpose, a group of underwater investigators who view the ocean floor as a graveyard and a crime scene. They dive the Suriname river in South America in search of a Dutch shipwreck called the Leusden, scene of a horrific mass murder and a crime largely forgotten for 300 years. 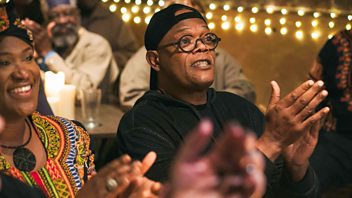 Samuel L Jackson travels through the US to tell the stories of those who resisted slavery.

Samuel L Jackson and the team travel through the US to tell the stories of those who resisted slavery, often making the dangerous journey to freedom in Canada.

Samuel L Jackson is joined by journalists Afua Hirsch and Simcha Jacobovici, along with Diving with a Purpose (DWP) – a group of underwater investigators dedicated to restoring their ancestors' lost history. Together, they investigate the individual stories and events that helped bring an end to slavery in the United States.

The slave trade is not just a story of victims, but of the heroes who fought for emancipation, held onto their culture and values and laid the foundations for future generations. The DWP divers explore the cold waters of the Great Lakes to better understand the history of the underground railroad and the freedom boats that helped fugitives flee slavery and cross the water to safety in Canada. Whole families risked the long, perilous journey across the United States, using a network of safe houses, coded messages and supporters to escape the plantations.

Journalist Simcha Jacobovici learns about the legendary Harriet Tubman, one of the most famous enablers on the underground railroad. Simcha also meets historians in South Carolina who reveal the history of black soldiers who served in the Union Army during the Civil War, helping to overturn slavery. 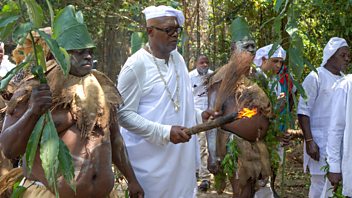 Samuel L Jackson and the team examine the events that ended the slave trade.

Samuel L Jackson and the team examine the events that ended the slave trade and piece together the heritage and identity taken from the descendants of millions of trafficked Africans.

Samuel L Jackson is joined by journalists Afua Hirsch and Simcha Jacobovici, along with Diving with a Purpose (DWP) – a team of underwater investigators dedicated to restoring their ancestors' lost history. Together, they investigate the events that ended the slave trade and the heritage and identity that was taken from the descendants of the millions of trafficked Africans.

Outrage in Britain at the treatment of captured Africans gained momentum, and by the early 1800s, attitudes had changed. What was once a seemingly unstoppable trade was abolished in 1807. Samuel L Jackson and Afua Hirsh examine the petitions, books, prints and the work of activists that led to the end of 400 years of the slave trade, while the DWP divers explore the tragic history and wreck site of The London, a slave ship carrying slaves who had won their freedom and been re-enslaved.

Having discovered that he is descended from the Benga people, Samuel L Jackson travels to Gabon and is welcomed into the tribe by the king and the elders, who share their traditions and stories. The DWP continue their work to recover the history of the enslaved and piece together this lost heritage. They travel to a community in Costa Rica to help a team of young divers look for evidence to support the stories that their African ancestors escaped from two Danish slave ships. 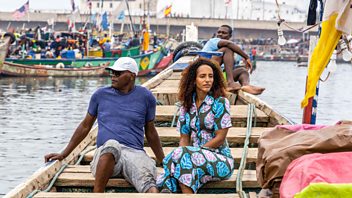 Samuel L Jackson and a team of journalists and divers explore 400 years of slavery.

Samuel L Jackson and a team of journalists and divers explore 400 years of slavery. What happened to the 12 million enslaved Africans who were stolen from their homes and shipped across the Atlantic?

Samuel L Jackson traces his ancestry to Gabon, visiting the coastal area of Loango National Park to see from where his enslaved ancestors were shipped in their millions to the Americas. But he wants to do more than tell the story of the enslaved who survived. The trans-Atlantic slave trade existed for well over 400 years, involving more than 45,000 voyages from dozens of outposts along the African coast. Over 2 million Africans died en route, and up to 1,000 slave ships ended up as wrecks, with only a handful ever having been identified. Jackson teams up with a group of underwater investigators who view the ocean floor as a graveyard and a crime scene. They dive the English Channel to find the 350-year-old wreck of an unidentified slave ship and discover its secrets. This is the oldest slave ship ever discovered, and deep on the dark ocean floor the divers make a remarkable find.