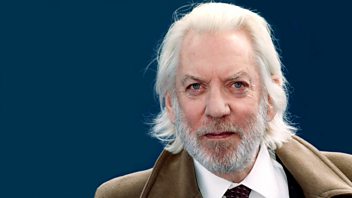 Sue Lawley's castaway this week is Donald Sutherland. He has acted in 104 films, including such classics as MASH, Don't Look Now and JFK. Tall and lanky as a child, he was called 'Goofus' or 'Dumbo' because of his big ears. However, it was those ears that caught the attention of the director of The Dirty Dozen and thus his film career was launched.

Now appearing on the British stage for the first time in 36 years, he chooses eight records to take to the mythical desert island.