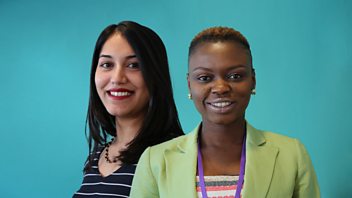 Oluwaseun and Shreya on sexual violence and being computer savvy. Jodi Picoult tells us about her new novel . We listen in to a conversation between two breast cancer patients.

They’re called Future Leaders and they’re fifty of the brightest and best, according to The British Council. They’re in London this week for high-powered training and networking. They were selected from 16,000 applications worldwide. We talk to two of them: Oluwaseun Ayodeji Osowobi from Nigeria and Shreya Nayak from Canada. Oluwaseun set up the Stand To End Rape Initiative after it happened to her. Shreya works to get more women involved in politics as well as getting them more computer-savvy.

Jodi Picoult has a knack for writing stories about what's topical. The setting for her latest one, A Spark of Light, is an abortion clinic where a gunman holds patients, medical staff and protestors hostage. A police negotiator who has a personal involvement tries to save their lives. In this novel every shade of opinion is explored and it's published at the point in time when the appointment to the Supreme Court of Brett Kavanaugh re-ignites the debate in America about access to abortion and contraception.