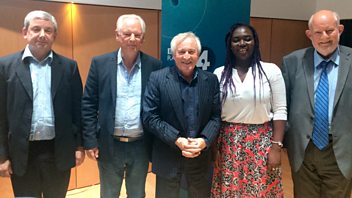 Jonathan Dimbleby presents political debate and discussion from Brentwood School in Essex, with a panel including the former Home Secretary Charles Clarke, the Executive Editor of the political website ConservativeHome Paul Goodman, former Trade Minister and Minister to the Cabinet Office Lord Maude of Horsham, and the Momentum activist Barbara Ntumy.