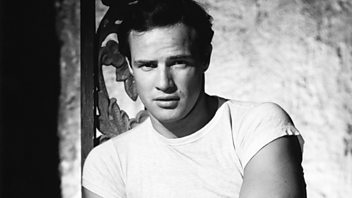 Arts news with Samira Ahmed, including the Charles and Ray Eames exhibition, a Marlon Brando documentary based on his tapes and Janet Suzman's debut as an opera director.

The husband-and-wife team of Charles and Ray Eames are widely regarded as America's most important designers, perhaps best remembered for their mid-century plywood and fiberglass furniture. Critic Corinne Julius joins Samira at a new exhibition at the Barbican in London where they explore their enduring appeal.

From A Streetcar named Desire and The Godfather, to Last Tango in Paris and Apocalypse Now, Marlon Brando is hailed by many as one of the great actors. Now 300 hours of audio tapes have revealed the painful childhood and dysfunctional adulthood that he drew on for his art. Listen to Me Marlon sets out to document his life and work in his own words. Producer John Battsek describes the process and the actor Kerry Shale offers his reaction.

Darryl Collis from See Saw Media explains how film studios are using fees from product placement to beef up their budgets.

Conductor Jane Glover discusses her new production of Mozart's The Marriage of Figaro featuring students from The Royal Academy of Music, alongside stage actor and director Dame Janet Suzman who is turning her hand to directing opera for the first time.