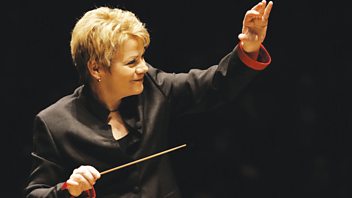 Mark Lawson interviews Marin Alsop, the first woman to conduct the Last Night of the Proms

Marin Alsop, the first woman to conduct the Last Night of the Proms, film critic Philip French on retiring after 50 years, the life of actress Jean Seberg, and returning TV series.

American conductor Marin Alsop discusses becoming the first woman to conduct the Last Night of the Proms. She also reflects on toying with the idea of conducting with one hand after injuring her wrist, and falling in love with Leonard Bernstein at the age of nine.

As Philip French puts away his pen after being The Observer's film critic for 50 years, coinciding with his 80th birthday today, he discusses the 2,500 films he has watched and the changes he has seen in cinema in that time.

As Bonjour Tristesse is re-released in cinemas, the tragic life of actress Jean Seberg is re-assessed by her biographer Garry McGee. The star of A Bout De Souffle and Saint Joan was a political activist and supporter of the Black Panther movement and became the subject of an investigation by the FBI. She committed suicide in 1979, after her film career had faded away amid bad press and conspiracy theories.