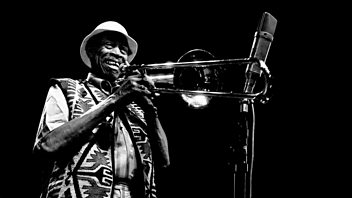 An interview in which trombonist Al Grey, who died in 2000, selects his key recordings.

Archive interview in which trombonist Al Grey, who died in 2000, joins Alyn Shipton to select his key recordings with, among others, Count Basie, Lionel Hampton and Dizzy Gillespie.

Trombonist Al Grey (1925 - 2000) was one of the most distinctive soloists in big band jazz, working with many of the most famous swing orchestras. In an archive interview, recorded just before his death 11 years ago, Al selects his key recordings with, among others, Count Basie, Lionel Hampton and Dizzy Gillespie.

With his gap-toothed grin, pith helmet and extrovert trombone style, Al Grey was one of the most colourful characters in jazz. He and Alyn Shipton first met when Radio 3 broadcast Lionel Hampton's Golden Men of Jazz, for whom Al was musical director. They kept in touch, and not long before Al's death in March 2000, Alyn visited him at his home in Great Neck Long Island to pick the trombonist's favourite recordings from his voluminous catalogue.